"He who wants to take, must first give” – Lao Tzu

On Dana – Generosity of the Heart 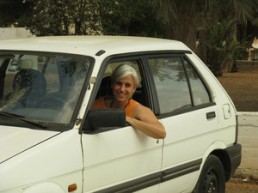 For many years I was carless. I got around on buses and trains, until a friend taught me how to hitchhike effectively: let loose your long flowing hair, don a friendly smile (but not too huge), a short dress (but not too short) and a sweet expression. The only problem was, I had short hair at the time and not a single dress to my name.

Despite this obstacle, I decided to give the Israeli drivers an opportunity to prove their generosity – and they did not fail me. I met many lovely people whose sole desire was to safely deliver me to my destination. My advanced age protected me from any other ideas they may have had. I swore then that the day I owned a car of my own I too would demonstrate generosity and would never stop taking hitchhikers.

So now I have a car. My very own. Not a company car, not my parents' car, not my girlfriend's car, not a friend’s car. Mine. And on my Subaru Justy I am the boss, I am the Law, I am the Queen. It takes me wherever I desire like a faithful dog; the roads open before it and “the whole Earth is full of its glory.” He is my best friend, my second home. My freedom.

My Justy and I race the streets, traverse valleys, climb mountains, assessing both of our limits in the wild desert, meditating together on the long beautiful Arava highways. Our mutual advanced age does not show.

And we collect hitchhikers. Weary old ladies with eggplant-colored hair and heavy baskets on their way home from work, yeshiva students who have a hard time digesting my bumper sticker that states: “There is no one to rely on but Mother Earth,” backpacker couples with dreadlocks and guitars on their way to a Rainbow Gathering who love my “Om Nama Shivaya” sticker. And in between, regular elderly people on their daily routine to the doctor, and girls coming home from the beach who would rather not put out their cigarette.

Indeed, the Buddha was right when he said:
Before giving, glad; while giving, the mind is bright & clear; having given, one is gratified (AN 6.37).

I am glad when I set out on my journey and make sure the passenger seat beside me is free of bags, books, food boxes and plastic bottles waiting to be recycled, so as to easily invite my potential hitchhikers, I am happy when I stretch across to the window to roll it down and inquire: “Where are you headed?” And I am gratified when my passengers mumble their thanks (“Good health upon you”, “God bless you”, “Good on you, sister”, “Wow, what a cute car! Selling?”)

And I think to myself: thank You. Thank you for enabling me to practice generosity. To return the many favors I received by nameless strangers who gathered me along the way. To practice giving. To share my abundance.

In her book The Laws, Ronit Galapo describes two parallel stories about two friends traveling in the desert and one of them accidentally spills all of his water. In the first story, the friend who still has water decides to save himself (“If I help you we’ll both die, and then I’ve hurt two people. Which is better – for both of us to die or for at least one to survive?”), and in the second story, the friend chooses to share his water with his friend (“In any case we will die one day. The real question is: as long as we are alive, how do we choose to live?”).

This perhaps causes each of us to ponder what we would do in a similar situation. As a child, I used to sometimes have heroic fantasies, mostly about saving children from a burning house or from drowning. I somehow imagined such an event would give my life what the psychoanalyst Heinz Kohut described as every individual’s need to feel significant, potent and loved.

It seems it is easier for us to imagine ourselves committing some kind of heroic act, rather than simply being generous when driving on the highway, allowing someone to enter our lane, or when we come home from a long tiring day and our partner asks us to cook something/wash the kids/clean the house.

The real question, therefore, is how does our intention for generosity express itself in our daily life. We can promise ourselves that the next time we get stranded in the Sahara desert with a friend who was clumsy enough to spill all of her water we will be generous and share our water with her. Heroic fantasies are easy; we’re good at crises. But what about those little moments in our daily lives, when it’s not convenient, when we just don’t feel like it. In these moments it is not our life that is on the line, but rather something much dearer to our heart – our comfort, and our main resources: money, time and energy.

Generosity or giving in the ancient Buddhist language of Pali is called Dana. The Buddha referred to the heart quality of Dana as a value of the highest order. It tops the list of the ten Paramis (Perfections), the virtues to be developed and cultivated in our practice, those internal qualities that naturally reveal themselves when the clouds of desire, hatred and ignorance are cast aside to reveal the nature of the quiet, open and generous mind.

The monk Bikkhu Bodhi says: “In the teachings of the Buddha, the practice of generosity claims an important place, identifying it as the source and seed for spiritual development.” And the Western-Tibetan teacher and monk Pema Chodron summarizes: “The first Parami is that of generosity, the journey to learn how to give. When we feel we are not good enough or worthless, we hoard things.”

The Buddha recommended that every time we notice our heart contracting – to purposely practice the opposite: when there is fear – to practice courage, when there is closedness – to practice openness, when there is contraction – to practice generosity. At first we may feel this is “not authentic” or “artificial”; we may be identified with a certain quality such as a sense of lack, which becomes the identity of our “self,” as if it is “who we are.” The Buddha says that generosity is the best antidote to the sense of “me, myself and mine.”

Generosity is expressed not only through monetary giving. During one of her retreats with 'Tovana' in Israel, the vipassana teacher Shaila Catherine shared that throughout the entire sitting a fly stuck to her lips and sucked up the moisture at the edge of her lips. She said that throughout the entire experience she sat there motionless and allowed it: “I told myself: this is also an act of Dana,” she shared.

The entire world relies on endless giving: the tree gives to the earth its leaves that serve as compost, the earth gives to the tree food and water, we receive oxygen from plants and give CO2 in return. The food chain in the living community is a cycle of give and take, the sun that spreads its light and warmth equally upon all living beings, the clouds that bring us rain, the rivers that run to the sea, vaporize and return to the sky only to come down once more as rain. The stars, those far-away suns that share their light with us for romantic purposes. Our bodies too will return one day to the earth and will contribute to the endless cycle of give and take.

In the Buddha’s times, he told the monks who had difficulties with the practice of Dana to take an object, perhaps a small stone, and pass it from one hand to the other – practicing give and take – for hours. And when the right hand gives and the left hand receives, and the opposite, ad infinitum – who is the giver? Who is the receiver?

I have a friend who donates blood every time she sees the blood-donation vehicle parked at Rabin Square;

I have a friend who insists on paying for me every time we go out;

I have a friend who volunteers once a week at the Sexual Assault and Domestic Violence Support Center;

I have a friend who collects and feeds abandoned dogs and cats;

I have a friend who contributed the second stipend she received from the University to allow it to support another student;

I have a friend who donated her apartment in Tel-Aviv for use by the community of “Tovana” practitioners;

I have a friend who regularly contributes part of his income to NGOs;

I have a friend that at every retreat he sits he contributes twice the cost of the retreat;

I have a friend who organized a campaign to save a small donkey in Jaffa whose owners abused him, and transferred him to a safe haven on a donkey farm;

I have a friend who drives Palestinians from the occupied territories to hospitals in Israel;

I have a friend who every time she goes out to have fun with her daughter invites her neighbor’s daughter to join them;

I have a friend who teaches workshop for women with cancer at no cost;

I have a friend who has been volunteering at a hospice for years;

I have a friend who every year takes another friend’s car for the annual vehicle licensing test, because it’s just “too much” for the other friend;

I have a friend who is a homeopath who has been volunteering for years in a clinic in East Bartaa, an Arab village.

According to the Buddha, the most important gift of the highest value is the Dharma. The greatest generosity is that of the Bodhisattva, one who has awakened and can “continue onwards” and not return to a life of suffering and imprisonment, but rather she chooses to return to the world to help all living beings awaken.

In his book A Path with Heart, Jack Kornfield tells the following story about a young and zealous student who went to practice with one of the abbots of the Christian Desert Fathers: After some days he asked, "Tell us, master, when we see our brothers dozing during the sacred services, should we pinch him so they stay awake?" The old master replied with great kindness, "When I see a brother sleeping, I put his head in my lap and let him rest" (p.36).